Samsung introduced its newest smartphone the
Galaxy Note 7 with a 14-nanometer Qualcomm Snapdragon 820 quad-core 64-bit
processor, 4GB RAM, a 12-megapixel camera, waterproofing, and wireless
charging. And according to the specifications, iPhone 6S has minimum
hardware specs than Galaxy Note 7. But based on a new speed test between these
two phones iPhone 6S and Samsung Galaxy Note 7, iPhone 6S is much faster than Galaxy Note 7. 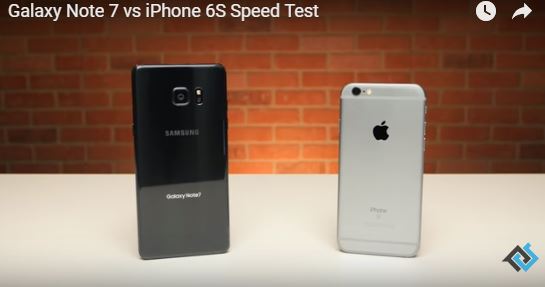 In the video
comparison, the two phones simultaneously launched the same apps, Samsung’s
Galaxy Note 7 was thoroughly defeated by the iPhone 6s. In addition to that the
iPhone 6s managed to complete the test a whole lap faster than the Galaxy Note
7. The Note 7 ended up taking significantly longer in loading heavy games like
Asphalt 8 and its CPU also took its own sweet time in exporting a time-lapse
video.
So is iPhone
is the best smartphone yet?
Read More
# iPhone6S# news